Background: several months ago I was asked to do a trunk show for Patchwork Gardens in East Amherst. Their store has a monthly hexie class and they tend to focus on one paper shape each month. I was asked to pick my favorite shape that I could demo after the trunk show. After stating that picking a favorite shape is worse than picking a favorite child, I quickly picked the jewel which is the main element in my Salt & Pepper project.

Once we had picked a shape, I thought maybe I should have some other projects to share with the same shape. I really like to have more than one purpose once I've spent my money on the papers - I was sure the girls would agree.

That's when I put out the word that I was hoping people would be willing to share a couple scrap strips with me. I really wasn't expecting more than just a few strips from each person, something that a 49cent stamp would mail. Instead I was overwhelmed with generosity!! Here's the last packages:


Phew - that's a lot of fabric for everyone to share!!! And can you believe that there was not a single duplicate among the donations or my own scraps? That's unbelievable.

So - did you figure out what I'm working on? Maybe this give you a clue? 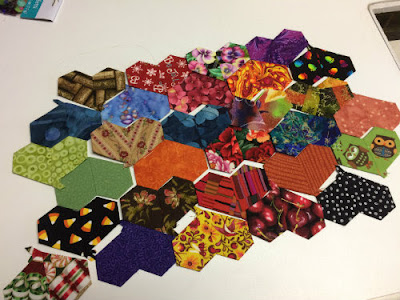 The original idea was to make a "large" size quilt using just the hearts but I decided that it was just too busy to "see" all the scrappy fabrics. 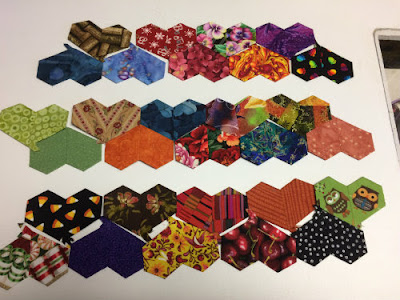 I've tried to see if I could create a box type shape with the hearts but I haven't gotten it to work yet so it appears I'll be doing my first strippy quilt.

What do you think?? I hope everyone who donated fabric is happy with the project!

And now it's your turn. What projects are you working on? Secret or otherwise?
Any paper shape or vintage project is fair game.

And here it is the 17th again and I am late to the party yet again...I just cannot seem to get back to the hexagonia --I think they said my passport is
out of date.
BUT I am definitely getting those hexagons out after I bind the last I Spy tomorrow.... I miss doing hexagons....
hugs, Julierose

The heart shape is very cute!

Can you use rectangles or squares to make the transition you want?Chris

This is going to be really cool, Sarah! Now that I know what you are doing, I wish I had chosen different fabrics! LOL

P.S. I love your strippy quilt idea--it will be amazing...hugs, Julierose

Neat idea and I love looking for the fabrics I sent you. Amazing that you got no duplicates.
Pat

I also teach a EPP class where we focus on one shape a month! However this month we did the Ice Cream Soda block---my favorite one so far. Diamond, kite & crown(third of hexagon). So much fun Last month they got a coffin shape to make a Halloween table topper.

Sarah, quick question: do you have a picture that people put on their blog to say they link up to your HELP Hexie Linky Party?

What a great way to use jewels!! I love it and will have to add it to my list of things to do!!