We got a little snow yesterday!

I spent a good 45 minutes shoveling my 4-car-length driveway and that was with the help of a neighbor walking by who helped shovel the end of the drive (always the worst part!). It was still kinda early so I decided to do a quick walk around the block. When I got back to the house I shoveled again - we had gotten 2" in the time it took me to shovel and the plow had come thru and filled in the end of the drive again. The same neighbor was walking back home and again helped with the end of the drive. 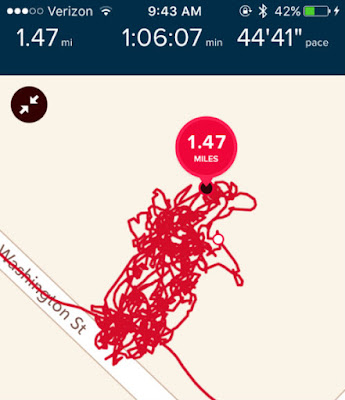 Denise says I'm a disorganized shovel-er! I say fitbit GPS can't handle small spaces as there is no way I shoveled the street, the neighbor's yard and over my house. I tried this once when I was mowing and it said I mowed right over the entire house. I. Don't. Think. So! 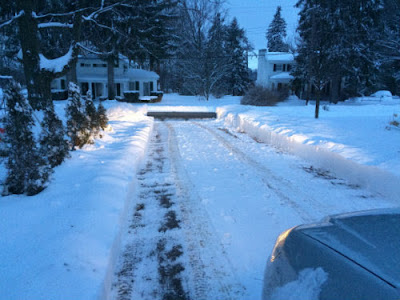 Luckily while I was at work, another neighbor blew out the 4 or 5 inches that came in during the day and I just had to shovel the end again when I got home last night and again before I left this morning. Rochester Airport (50+ miles away) had a record breaking 16" for the day. Not sure what out total was...


Of course, Zorro had to investigate! The yellow lines denote the height of the drift between street and sidewalk thanks to the plows, the drift on my side of the sidewalk where I piled it and then ground level. Those drifts are pretty high but most of it will melt by the weekend as we are expecting 40F on Friday.

And now...on to hexies!
I can't say this has been my most prolific week but I did make some progress on a couple projects. 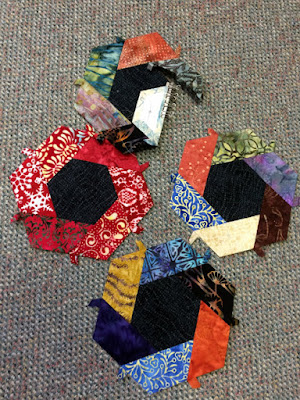 I'm still trying to get all the small rosettes stitched that I had cut out some time ago. This includes more monochromatic rosettes like the red which are at the center of each large rosette. 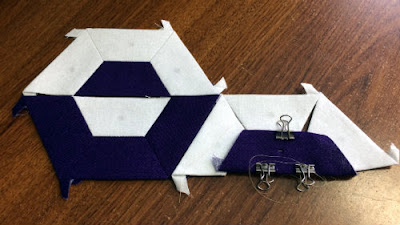 On Saturday I worked at the LQS which pays me in fabric. There was a pretty brown/green/teal floral that I just "had" to have but I wanted to pick a hexie project for it so I didn't get too much or too little fabric. In the process of looking for a project I also found another to use one of my fav dark purple fabrics. I did just enough to get it started and out of my system and now I can go back to the twisted project which I was supposed to be working on...

And now my friends - it's your turn to share your hexie projects.

It doesn't matter the paper shape or whether your project is new or a UFO - we just want to be inspired!!

How interesting your black and white half hexies.


Well, it looks like you covered the territory well, even if you did apparently shovel off the roof of your house.
A smiley face by chance? Spooky. : )
Okay, 'fess up. How many WIP hexie projects do you have?

Great fabrics in your projects.

Yikes, that's a lot of snow all at once! We *only* got about 3 inches this weekend. It would be very dangerous for me to work at an LQS!!! Your new project is cute so far.

certainly a heavy snow fall, we fortunately never get snow like that. How good to have such a kind neighbour to help dig you out. Zorro is obviously liking the snow would have thought his paws would have objected! Good to see the hexies coming along,. good way to be paid in fabric, mind you have had a big spend these last few days

That's a lot of snow, and way too much shoveling! Glad you have a nice neighbor! We haven't had much snow in Iowa this year, maybe 2 inches last week (which is the most so far this winter!) but it is mostly melted now and it is supposed to be 65 degrees tomorrow - what the heck?!