Didja think I got lost? Nah…it’s just been a whirlwind of activities. Shall we go in reverse order? Thought so! 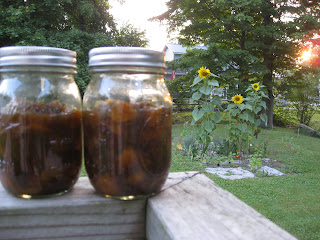 Last night I made Caribbean Peach Chutney. Not such a feat in and of itself but there’s this little heat wave going on so while I questioned my timing and mopped my brow, the peaches had to be used or tossed. It smells divine but didn’t make very much, hence too much headspace in the jars that I did get. You can also see the rest of my garden in the background – my 5 (!) tomatoes just ripened while the cherry tomatoes continue to produce. Any ideas on what I can do with them? The eggplants are tomato size and the next wave of purple peppers is starting to arrive. The sunflowers opened last week – I bet the tallest is close to 9 or 10 feet tall! The Glads are spent and I am determined to plant more of them next year.

Not much sewing has happened in the last two weeks. Working half days at my day job and then working the rest of the day at the fair left little time for anything else. It was easier to bring my tatting with me. Then I spent all of my “free time” last week pulling escrows (I’m the school tax collector) and we had internet viruses so I couldn’t have posted if I wanted to. 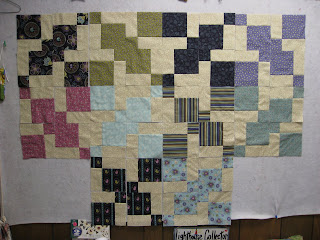 I did buy a FQ bundle of ‘Sew Chick’ by Bernatex from the Quilter’s Daughter booth at the Fair. We’ve all been greatly anticipating this store as it’s a couple miles from my office and supposed to open September 25th! Claudia says I’ll be working for fabric on opening day which is ok because I need border fabric. This is a disappearing 9-patch variation that will end up about 4 x 5 blocks plus the borders. That makes 2 blocks of each of the colors shown. I’ll still have some “parts” from the FQs for table runners and such…

And last but not least – the pictures that I did take during the fair document this: 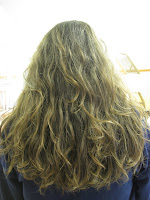 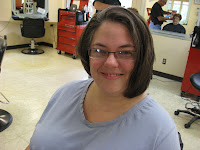 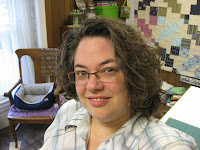 I chopped 13 inches off and will send the pony tail to Locks of Love or Wigs for Kids. The stylist showed me how to style it straight but I admit it’s much easier to let it go curly!
Blogged by Sarah at 12:11 PM 1 comment: