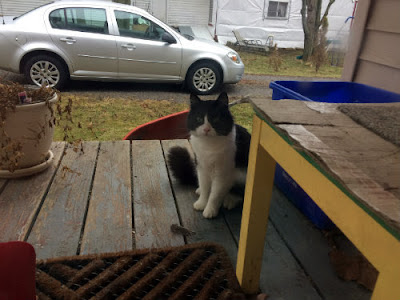 For several reasons, I was pretty much a couch potato last week and ignored the pending painting in my bedroom. It seemed like a good time to start a project I had kitted up for later in the month. Oh well, there's still time to kit something else for my conferences. 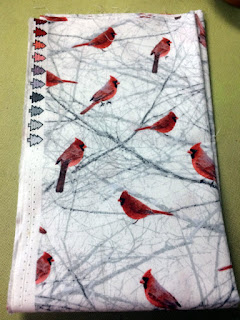 The project started with the last 2 fat quarters of this cardinal fabric from a LQS - cardinals being my fav bird. I scrounged my Hexieology Pinterest board for ideas and found this one.  I liked it because it used the hexie thirds I had just finished using in my owl quilt. This would be the third project using various papers from the owl quilt. I like getting my money's worth :) 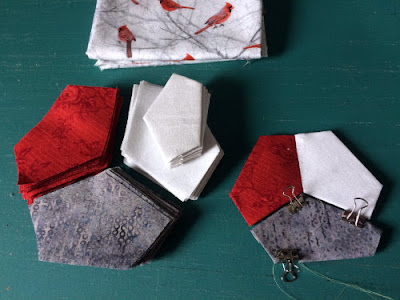 I had spent an evening fussy cutting from the 3 coordinated fat quarters and set it aside for one of my upcoming trips. Well, I had to make a practice hexie. I am sure you can understand.

After things went south I spent most of the weekend on the couch and out came the new project. After that it has been strictly an obsession to see it progress. 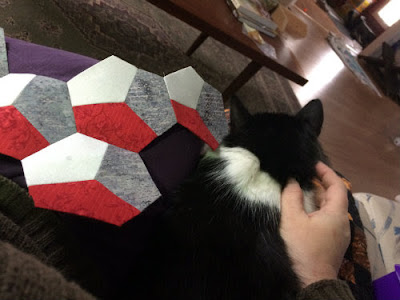 I did have snoopervision. Z spent 88 minutes sitting next to me. You may think it's funny that I tracked it but I can count on one hand the number of times that Z has sat with or on me in the last 3 years. The boys may not have gotten along very well but Z spent a week being cuddly and not eating much. Don't worry tho, he's back to his old antics and wanting to eat more than his share. 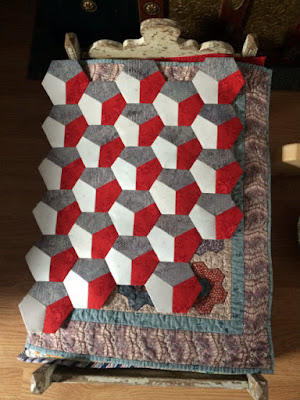 I had intended to make the quilt with the red thirds on the bottom but after emailing with my highly paid (cough!) consultant, we decided it should be rotated. In the end, no one will ever think of the other layout options and I'm happy with the 3D effect.

I was able to cut out enough thirds from the three FQs to make 41 hexagons. I plan to add another row to the right and then I'll extend the length and need to fill in the top and bottom to get this to the "proper" doll quilt size. I *think* I'll have enough fabric.

Can you believe my mother thought I had enough doll quilts? I. Don't. Think. So.

BTW - Don't forget to check Denise's post today. My  consultation "'enabled" her to order papers and start her own project. I told her she has no excuses when it's time to link to the next HeLP ...

There are lots of photos to share for Feline Friday and HeLP today so Mommma separated the posts, altho they will share one linky party. Be sure to check out HeLP HERE! 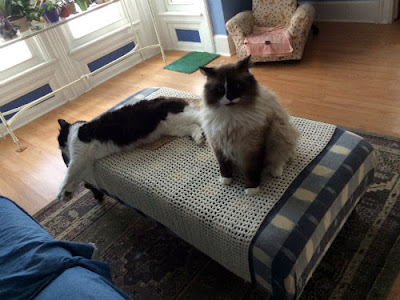 On Sunday, Momma put me on the ottoman with my brother. What was she thinking? 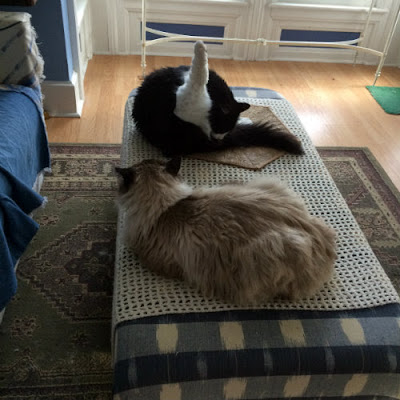 Zorro! Really? In front of the camera? You've got NO class!! 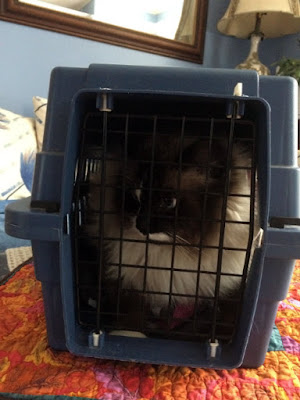 Monday morning Momma used the pillowcase trick to get me in to the PTU. How did I fall for that one again??!! She said I was breathing too fast. 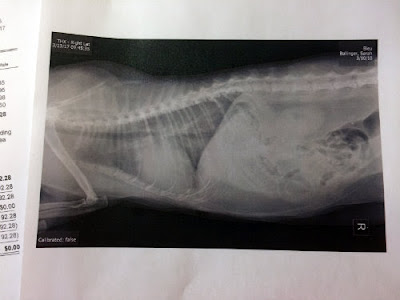 There was no end of indignities at the Vet, including checking my rear tem-purrr-ature and Xrays. 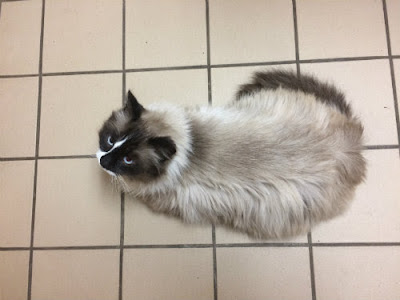 BTW - They matched the tile to my furs. How nice!!

The lady doctor  gave me an anti-inflamatory shot and thought I would improve quickly.
Sadly I was much worse the next day. I stopped eating after the vet appointment and my breathing got very labored. 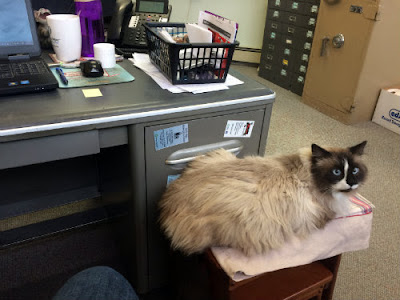 On Wednesday, Momma took me to work before and after another appointment. She set a stool right next to her chair with a pillowcase that smelled like Momma. 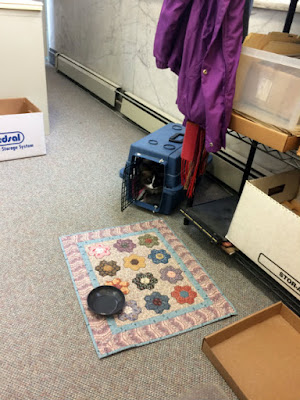 But I chose to sit in my Prisoner Transport Unit.

The lady doctor took another xray and a CBC blood test. Her best guess is that I have asthma. Supposedly kitties get it in the winter and the drywall dust from bedroom renovations probably didn't help. I have prednisone pills to take for 10 days but I don't like taking them. I'm quite lethargic and I'm still not eating despite Momma's best efforts. I've lost nearly a pound this week.


Momma called the lady again this morning about me still not eating despite the appetite enhancer I was administered on Wednesday. The lady suggested chicken flavored baby food.

She forced some in my mouth at lunch today and I only gummed half of it back out on to my furs (she's threatening a bib before she forces more on me for dinner) but it tastes ok. I'll consider more for dinner altho I hear she also bought turkey flavor too...

There are lots of photos to share for Feline Friday and HeLP today so I've separated the posts, altho they will share one linky party. Be sure to check out Feline Friday HERE! 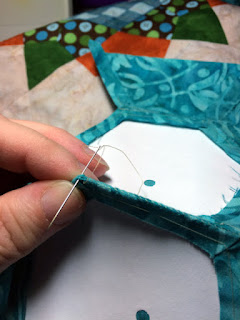 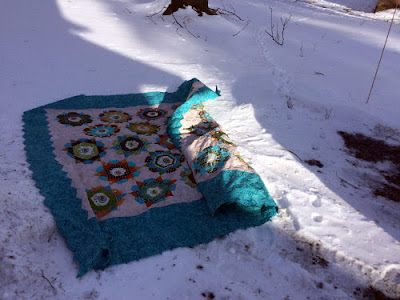 I attempted to take some photos of the top last night (it is daylight until after 7pm!) but it was still too windy from this week's snow storm.

I spray basted the top to the batting last night. 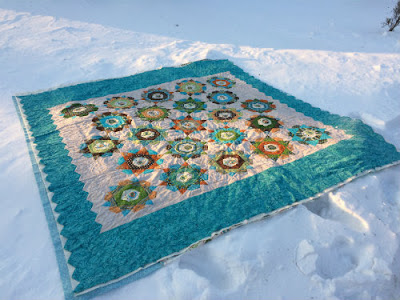 And spray basted the back this morning. 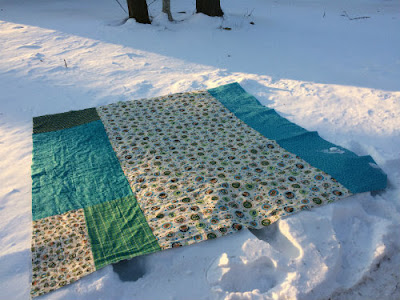 I was trying to use just the fabric leftovers from the quilt so while I had planned an extra 2" on each side of the quilt, I actually cut it much closer than that. The light colored fabric above is the owl fabric that I fussy cut for center of each of the rose stars in the quilt. 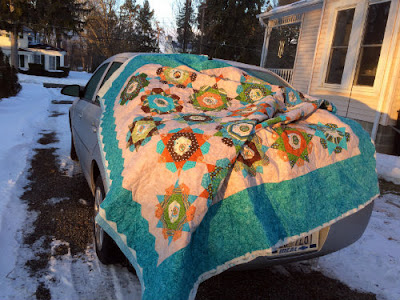 
I meant to count the number of pieces in the quilt but forgot - I'll have to add that Monday...

And  now, it's your turn to share a project for our Linky Party. What hexie projects have you been working on or planning to work on???! Do Share!!

It's been one of those weeks...

Between tending to a sick kitty... 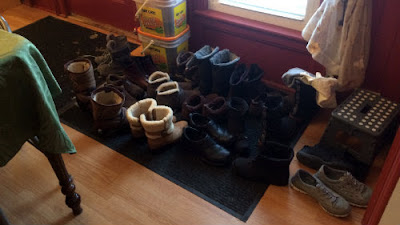 ... and cleaning and cooking for a dinner party for 15 at my house last night there hasn't been much sewing going on here at Casa Grande. 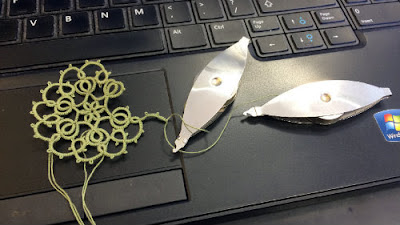 I'm afraid the best I can show you is a little tatting. This is the start of Renulek's Spring 2017 doily. A new round is posted every week or so with #5 posted yesterday. I'm about to finish round 2.

The party is now over and I have exciting news to share tomorrow for HeLP so I expect to catch up on the doily soon.

Sick kitty is not going to be so easy...keep us in your prayers!

Pretty much since that Introoder moved in to my house, I stopped sleeping with Momma in her bed. 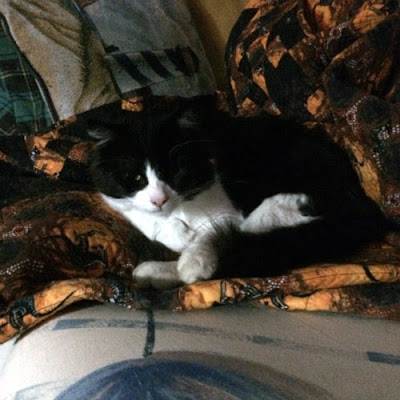 When she started sleeping on the couch during bedroom renovations I teased her once or twice by sleeping at her feet while Bleu slept **on** her chest. And let me tell you, that boy is a chunker!! I was waiting for see if I was gonna have to save Momma when she started gasping for air. 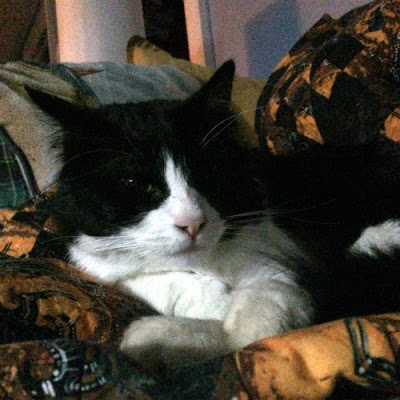 This week I have slept at her feet every night. She is so excited she may never sleep in the bed again. She keeps asking how I can manage sleeping near the Introoder on the couch but not on the much bigger bed? I dunno. I just decided and made it so. 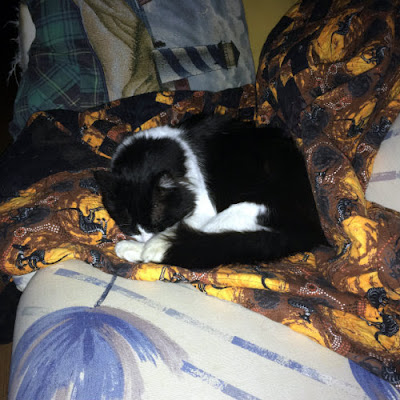 Last night I tried to see if I could push her over the edge and I almost did! When Momma came home from work she headed straight towards that crazy owl quilt instead of painting the bedroom. Well if she can do goofy things, then so can I! I headed straight for that couch and took a nap. Yipp. Right there were she could see me and everything. I even let her hold my paw when she took a break from stitching.

I would bet you a whole bag of kibble she's hoping I'll do that again tonight... 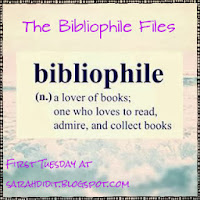 Hello and Welcome to my monthly book report!!

Goodreads says I'm quite behind in my reading this month - having finished only 11 of my goal of 90 books. I think it's best (easiest?!) to blame my lack of reading on my obsession with finishing the owl quilt as hexies are more of a TV activity for me, instead of audiobooks. Since the quilt is this close to being done and I need to get back to my studio to make name badge holders for a late April conference, I hope to have a better report next month.

FINISHED
Due or Die
Ready to Die - ummmm, I'mm sensing a DIE theme...
In a Dark, Dark Wood - lots of great twists!

IN PROGRESS
on my iPhone - Most Dangerous - not my typical who dunnit so this seems (and is) taking forever
on my stereo - Flashback - from one of my fav series as they take place in different National Parks. I particularly like this book as I have been to Ft Jefferson in the Dry Tortugas.

And now it's your turn to let us know what you've read recently. Anything counts be it novel, magazine, quilt pattern book or cereal box.

Can you taste it yet?
I certainly can!

What am I possibly talking about? Well I can taste finishing this quilt...

I've got probably 13 half-hexies to finish attaching and then I need to attach the top border to the mothership. Then this baby will be in the finished pile. Woot Woot!

It sure was nice of Melvina to have carpeted the bathrooms in Casa Grande before Momma bought our house. 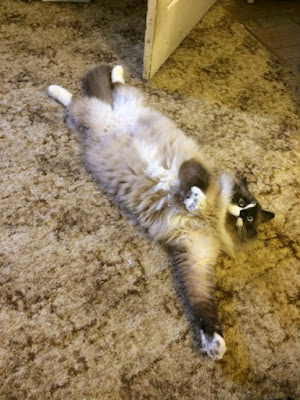 Why she ONLY carpeted the bathrooms in a huge house is the Everlasting Gobstopper question...


In the end it doesn't matter why cuz the carpet matches my furs perfectly!!