No peas under all my yummy quilts, Momma!
I can sleep like a princess here! 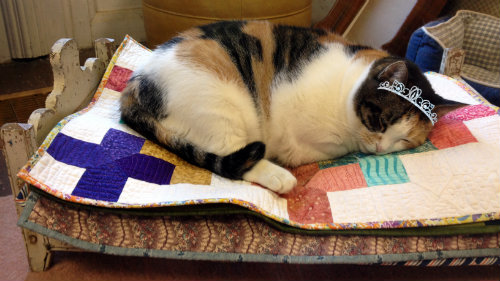 With a little "free time" last night, this morning and tonight, I'm working on making some zipper bags. Over the weekend I had pre-cut several of them and sorted them on the table by sizes.


Here you can see my quality control officer holding all the bits in place. Lucky me =^..^=
I'm sure the CQO will clear his schedule to snoopervise me making catnip toys this weekend...


It took a while to get my mojo in order but now that I'm in the groove it think I can get them finished much faster.

I think something's wrong with me...
A mere 17 weeks ago I would have stayed in bed as long as possible on "crisp" mornings and then ran for the couch and a thick afghan to veg in front of the tv with some hexies. In the evenings I would have been back under that afghan for more hexie time and warmth.  Now I almost jump out of bed and spend less time under the afghan. Take this morning. A quick check of the weather app while still under the covers told me it was just 32F. No problem, I can don long underwear under my sweats and add another t-shirt under the turtleneck and hoodie. After a beautiful walk (the stars are still out at 6:45 this time of the year and the sun is rising!!!), I figured I was already outside and might as well rake some leaves. Whoa! Leaves at 7:30 on a workday morning? See! There is definitely something wrong with me!!

Too bad I couldn't get a picture of my furry helper this morning since it was quite cute. Maybe another morning...


Anyway, I finally had to do something besides hexies yesterday. Ok, Well I finished the January rosette as shown above, but I needed to work on some *machine* work. And before one can take a project to the machine one must become a rotary cutting fiend. I spent hours this weekend cutting for lotsa projects.

These are the projects I remembered to take photos of. None of them are very far along as I was trying to make progress on too many projects at once.

There are still a lot more machine projects that need to be worked on this week but considering that something is wrong with me, maybe that won't be much of a problem. LOL. It won't hurt that tax season is winding down a bit and my next hexie trunk show in December is to be much shorter so there is no need to rush to work on more hexie projects. Maybe I can get class samples and gifts finished on time. Oh yeah, and don't forget my first Christmas bazaar is in less than two weeks.

Maybe I should be sewing instead of raking leaves with a furry supervisor... 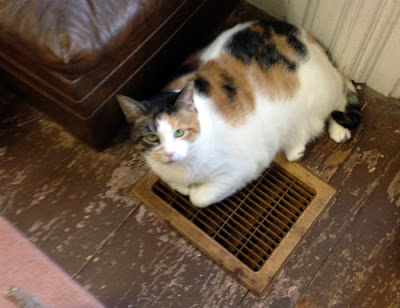 It only took some of this... 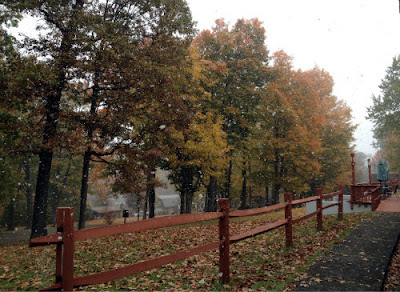 and little more of this... 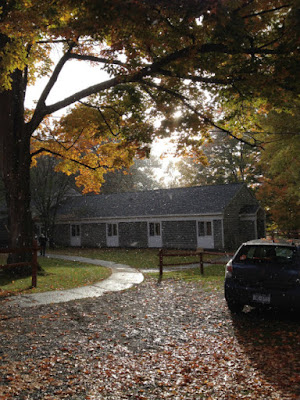 Too bad the snow didn't stick around so she would leave the heat on...

Does your Momma have the heat on yet?

Welcome to another edition of Hexy Linky Party! I hope you've had fun working on or planning your own projects since the last time we checked in!

My plus quilt is basted and about one-third quilted!!! 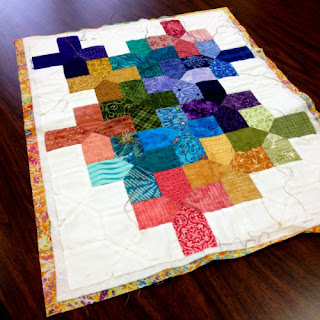 These pictures were taken yesterday. It's incredibly hard to tell in this photo that it's partially quilted and there are a bunch of threads to bury already. I always used to tie off my threads and have this ugly little fuzzy knot showing on the back but I recently saw a video that makes it pretty easy to bury them and it looks fantastic. It's well worth the extra time. 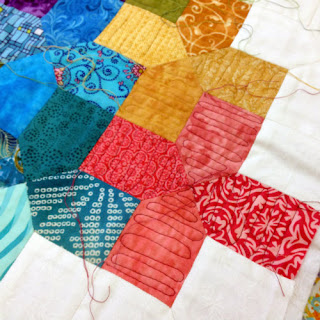 My quilting design is basically a side to side squiggle in the house shapes. I start at a fat end, squiggle down to the middle, cross over the center and then squiggle back out to the opposite fat end. Super easy. My squiggles aren't perfect but I like the imperfections. This ain't no robot quilting this baby! 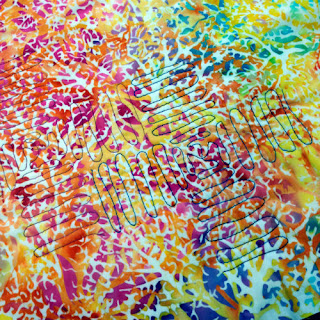 I'm really liking how the squiggles nestle together on the back of the quilt!

You're probably thinking that I should have quilted in a more organized order from one side of the quilt to the other but, in reality, I was looking at what partial bobbins I had that matched and maybe I could finish. I love projects that finish partial bobbins!

OK, my friends! What's going on in your hexie world? What projects are you working on? Pulling out of  the depths of your UFO pile? Planning something new?

Is it true, Momma? Can they really be taking about the "S" word this weekend when the trees are this pretty??!! 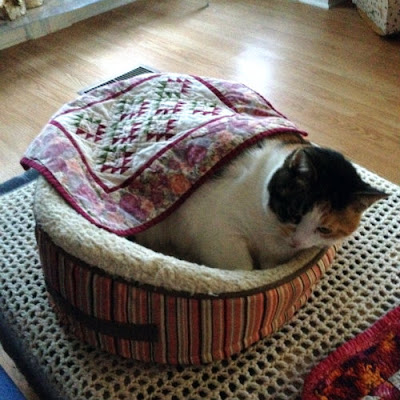 Where will you be if your Momma needs you this weekend? 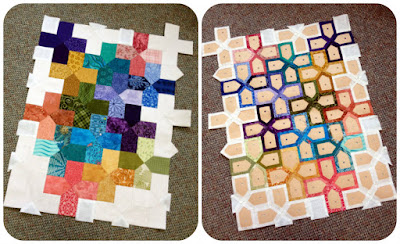 Is to finish trimming the excess white from the right side and remove all the papers.

I hope to have it basted tonight or tomorrow which really depends on how long our board meeting lasts tonight.

I'm really excited about the quilting pattern I've decided on. I hope it looks as good as I am envisioning it :)

I've purchased a #71 flat fell foot for my Bernina after watching a video that make it look easier to machine sew binding. Keep your fingers crossed the video was realistic!

Email ThisBlogThis!Share to TwitterShare to FacebookShare to Pinterest
Labels: hexiePlus 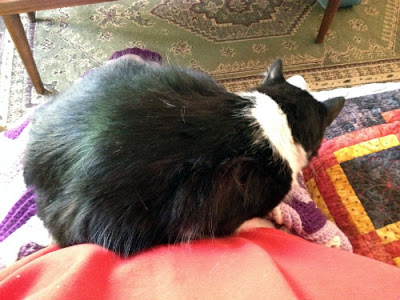 Oh hey Squeaky! You wanna sit with us too? Lemme move over here you you have some space! I love you too Squeaky! 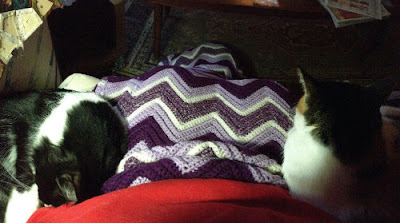 Momma here - yeah, things are weird at Casa Grande! Zorro busted my newish hard-to-find-size blinds and later spent over an hour in my lap  - more than the total he has spent there in the last 2 years! Then Squeaks came over and the two of them sat close to each other after a friendly mutual nose kiss and no fighting all day! It's not even a full moon...

Here we are again - it's been another fun month of 'reading'!!

I've been listening to the Women's Murder Club series on my iPhone while I walk or work on school taxes. I'm sad to say the last book in the series (until 5/2/16!) has been ordered at the library and then I'll have to pick another series. I hope some of my other fav series are on mp3 since I am enjoying reading them one right after the other.

CURRENTLY:
Audiobook on my home stereo: The Run
mp3 on my car stereo: Stay Close
mp3 on my iPhone: 11th Hour
paperback still on my night stand: The Other Family

And now it's your turn! What quilt books/novels/magazines/cereal boxes have you read in the last month?

Yesterday started with a long agenda but even tho I stayed in bed an extra hour to read email/etc on my phone, much to the chagrin of a certain B&W cat who wanted OUT, I still accomplished quite a bit!! 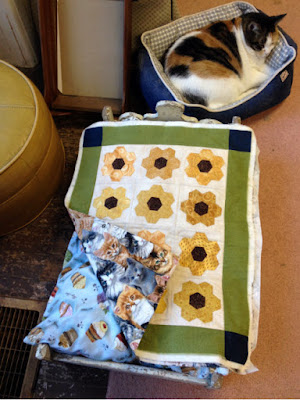 First I frogged out the stitching on 4 of these black eyed susan rosettes since I couldn't think of 8 more/different designs and the effect wasn't spectacular. I finally decided to use the cat print for backing since the gold rosettes matched the gold cats. After spray basting the layers I did one round of SITD quilting. I made the binding with a fab dark green. I just saw a video yesterday on using a #71 Bernina flat fell foot to sew on bindings...if I can find the foot soon I would like to give it a try... 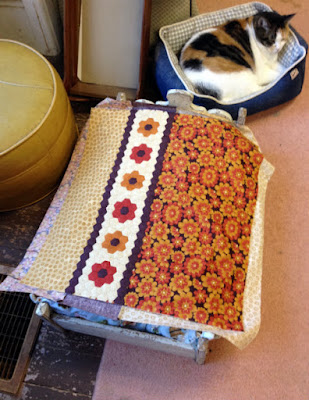 Next I top stitched the hexies to the side panels and then trimmed them to size. It turned out to be an easy decision to make the right hand side of the hexies as the exact center of the quilt - It's 10" to each side from the center. I was thrilled to see that I had enough of the dot, plum and floral fabrics to do the back the way I wanted. When the center is quilted, I'll be able to fold the back to the front and stitch it down so that the dot is over the floral, the floral is over the dot and the plum is over the hexies. Picking a quilting pattern on this one is gonna take me some time... 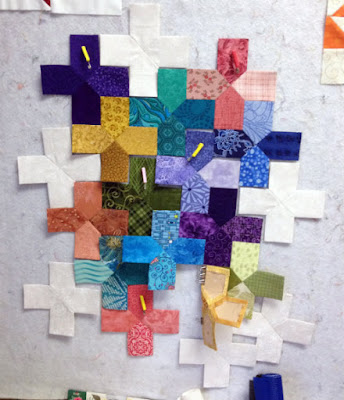 Last but not least I made lotsa progress on my plus quilt. I picked fabrics for the last of the 14 colored pluses and started stitching the top together. The colored pluses will definitly be done by week's end but I'm not sure about adding in the white.

Of course, while working at the LQS Saturday, I was showing off the pluses and that gave my boss an idea to do a red/pink/white Valentine's X and O quilt. So yeah, I started another doll quilt but it should be an easy finish. Luckily I am paid in fabric!! It's looking more and more like I am going to have lotsa holiday doll quilts for the dolly cat bed! 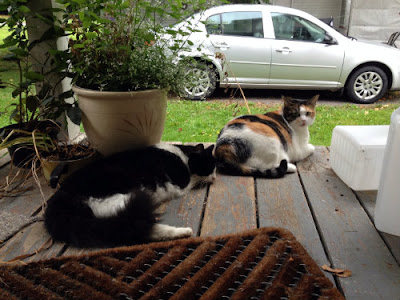 We CAN get along!
I mean he's almost touching my tookie and everything...