Not what I thought I would be doing today...

As much as I wanted to post the Twisted Hexie tutorial today, it's not going to happen. :-(

I blog during lunch but today Mom came to my office so we could discuss what we need to do for the open-hearth cooking class this Saturday and the antiques division that we run at the fair...you know, the fair that starts in 9 days and my quilt entry isn't done yet.

Then I remembered I needed to do more paperwork for the fire department's golf tournament which is also this Saturday.

And when all that was done I had 2 minutes left for lunch and there was no way to finish editing photos and write it up let alone eat my pb&j on rye. I'm sorry, Kay but it's going to have to wait until next week...

I think I need another vacation already...I won't bore you with the details but yesterday I was thinking of all the pending events I'm involved with and I think my next free Saturday is in May 2015!! Ugh.
Blogged by Sarah at 12:37 PM 6 comments:

Given the weather when I was camping this year, I think I was pretty lazy. It was either raining or could be raining and who wants to go hiking or mountain climbing when it might start raining? That afforded me lots of time around the camp site, hiding from the rain under the new canopy Santa brought me early or sitting close to the fire after the cold front came through. I may not hex as fast as some people but I think I accomplished a lot for just 10 days :-)
The outer row/sashing of this Value Proposition block was partly completed when I left for vacation - I think I only had to finish 2 or 3 sides.﻿ 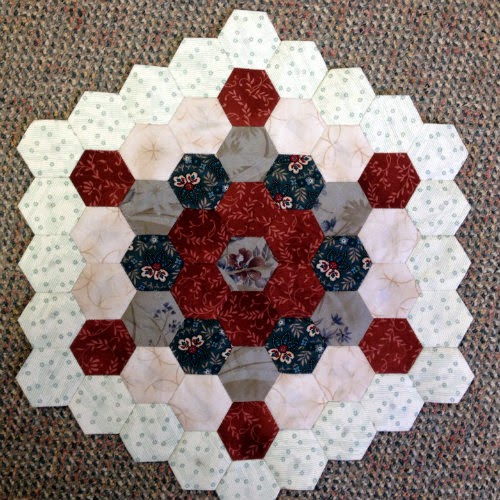 I may have mentioned that our local Hexie Group has a birthday club. At the beginning of the summer we pick a new size/shape and colors. For the next year, in the month of each participants birth, she will receive 6 basted 1.5" diamonds from each of the other girls. I think I have all but one set done now! 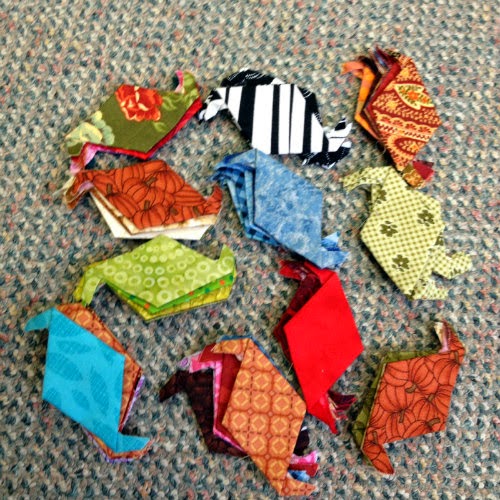 I think it was Chantal who encouraged me to work on my Rose Star/Owl project even tho I was going to try to catch up on some other projects. Typically, this project is only worked on while camping - some day I'll come up with an appropriate name for the project. I think this was the first project I used fussy cutting. 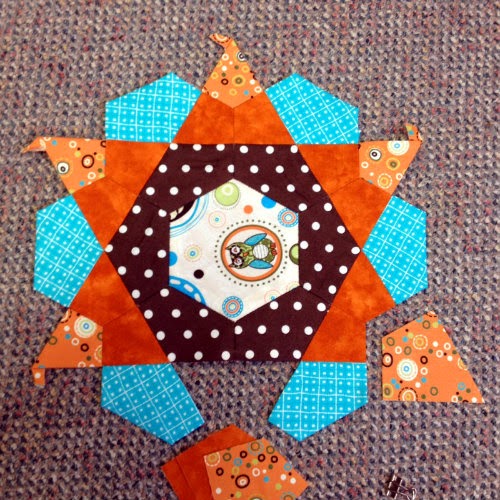 Unfortunately, I ran out of the kite papers to finish the block above or the second block below but I did as much as I could. Hopefully there are more papers at the LQS when I go for Hexie Group this Friday. 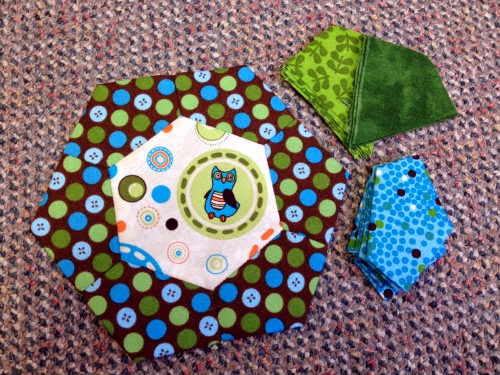 Next I worked on the flower block for The Hexie Blog's BOM - I think that was the June block. I had rearranged the layout a few times before I went on vacation and then just went with it. I really like the similar blues surrounded by purple. No idea what kind of flower this is but I'm sure it would be popular at the local nursery. LOL. 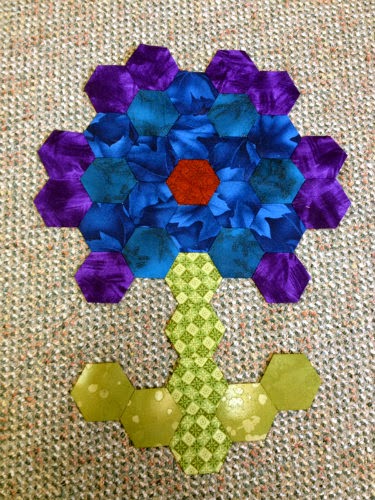 Next, I finished a POTC block. Two done...who knows how many more to do... 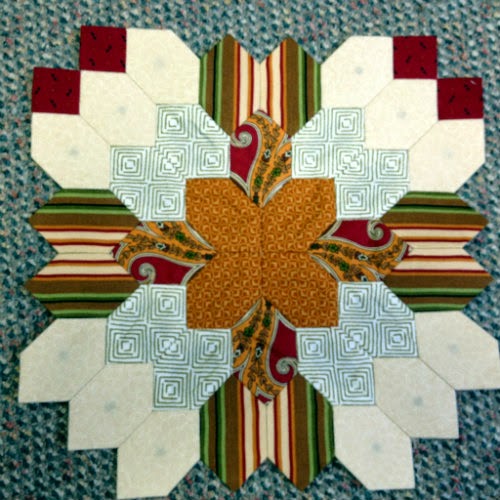 Over the course of the week, while I was hiking, I also worked on a twisted hexie. I had been asked for a tutorial on making these and I asked if she could wait until after vacation because I thought I could make a cool tute beside lakes and on mountain tops. Lets just hope the tute I hope to post on  Wednesday is a cool as I thought it would be. 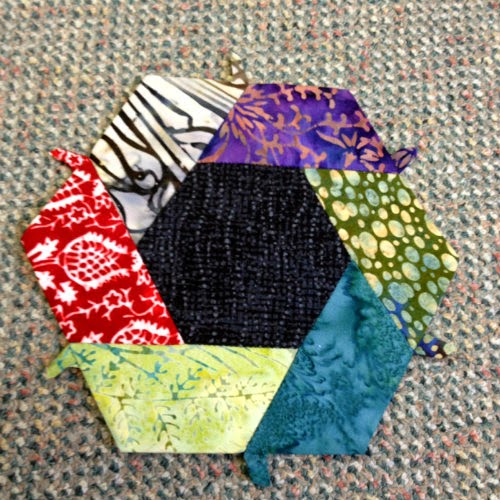 And what am I working on now that I'm back home?

This is the BOM ice cream cone that should be done today. Most of it was done at the craft bazaar on Saturday. Can you guess my flavors? Mint ting-a-ling dripping over blackberry in a sugar cone. Yummo!! 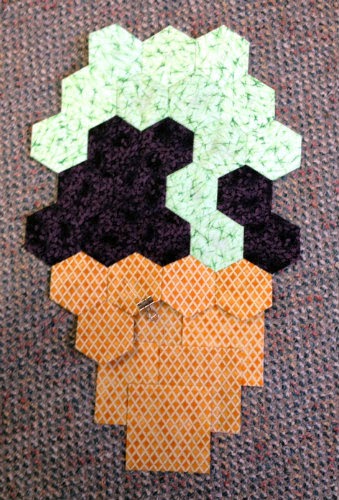 And for some reason, I have just one more hex to finish on the sashing for this block. As soon as I hit publish I'll finish it :) 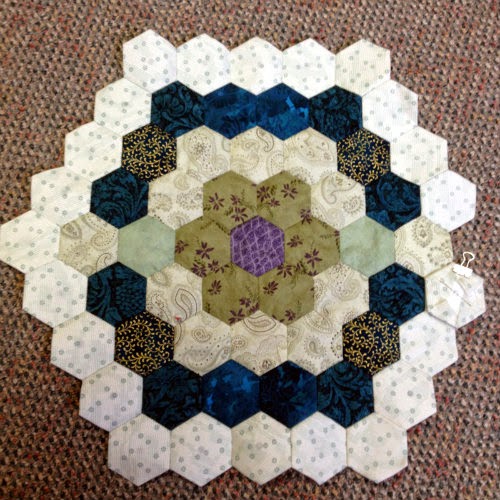 Don't forget a week from tomorrow is the next Bibliophile Files - I'll have a huge stack of books to share that I finished while camping!

It's ok Momma, I'll check your tire pressure for you! 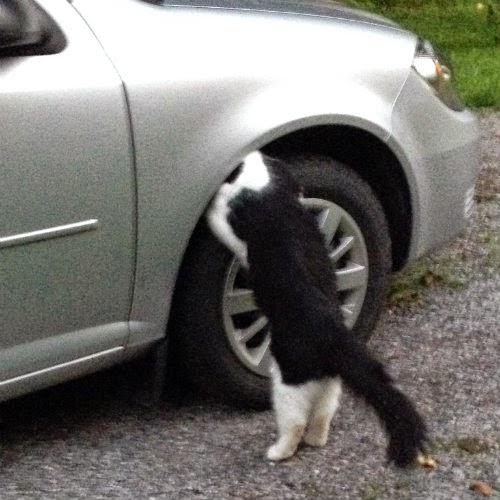 Looks good to me...now lets go get some snackies!

Have you helped your Momma lately?

Some how I came home from vacation with leftover money. Strange but a good start for next year's fund, right?! And since I paid for everything with cash, there is also lots of change to add to next year's fabric fund.  I can't remember who's blog was starting a piggy bank with all their change so they could go fabric shopping next July. If it's yours speak up and I'll add it here...

As you can probably expect, I spent most of my money on fabric. Nothing new there. On the one hand I have table at a craft bazaar this coming Saturday (I can't seem to get my focus yet this week on "production") and on the other hand, I have lots of new fabric to play with. Might as well put it to good use right away!

The car is unpacked (just barely!) and I'm slogging thru the pile on my desk at work. I can barely remember how to type and I'm still struggling with the new laptop. When I get organized there are plenty of pictures to share :)
﻿
Blogged by Sarah at 11:47 AM 5 comments: 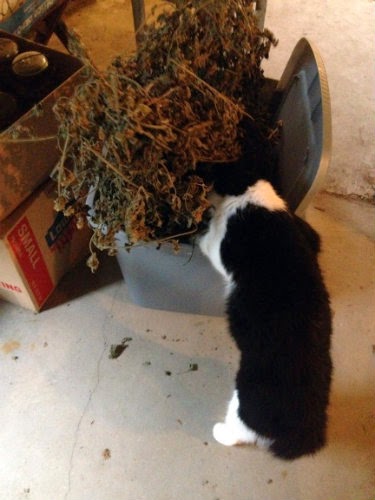 Look what I found in the basement when I "accidently" followed Momma down the stairs...

I can't believe she hid this is the basement while it was drying...what was she thinking?


Hello, My name is Zorro and I'm a nip'aholic!

Hello and welcome to another edition of HeLP for Hexie-aholics - home to any vintage/shape/size EPP project. I'm looking forward to seeing your projects!!!!


Today I do not have an update for any of my projects (I know - weird!!!) but a new gadget I bought myself. I got this stack of boxes at Dollar General for $7 or $8. They all snap together securely and the top box even has a divider to keep all the notions sorted. This is not an every day kind of box as far as I'm concerned, but for travelling to classes or vacation or hexie club it will be quite handy. I know, I'm easily amused :) 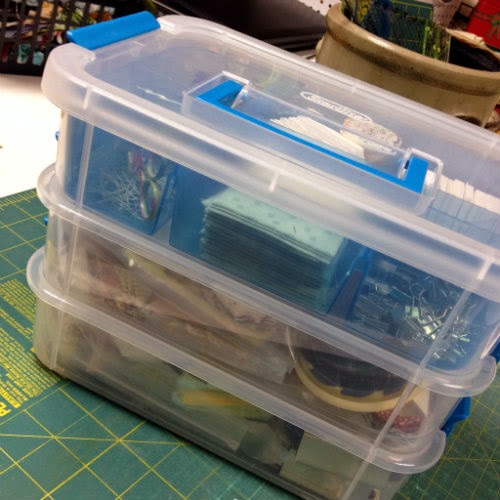 Ok - now lets see what projects all y'all are working on. Just remember to please link to a specific post and not your blog in general.

Email ThisBlogThis!Share to TwitterShare to FacebookShare to Pinterest
Labels: HeLP

Hey Momma we really like your yellow cone flower - when is it gonna blossom? How come you don't remember where you bought it? We can see it growing as we sit here and it's already as tall as you are Momma! 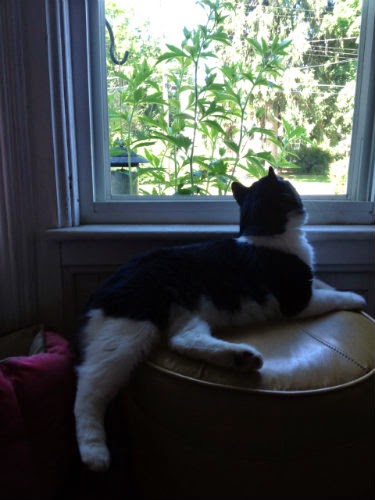 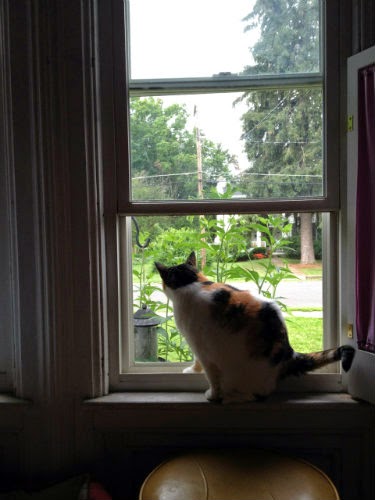 Do you like your Momma's flowers? Are they taller than your Momma yet?
﻿
Blogged by Sarah at 7:00 AM 2 comments: 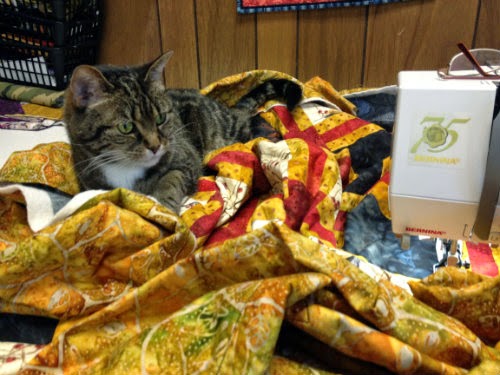 I finally started quilting my chosen quilt for this summers county fair and with just 32 days left I guess I'm just in time. 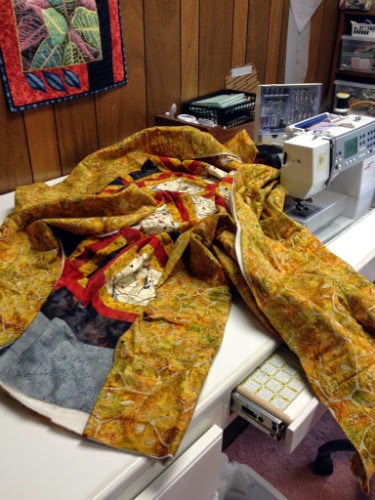 I left it on the sewing machine table over night and it appears that someone used it for a bed last night. 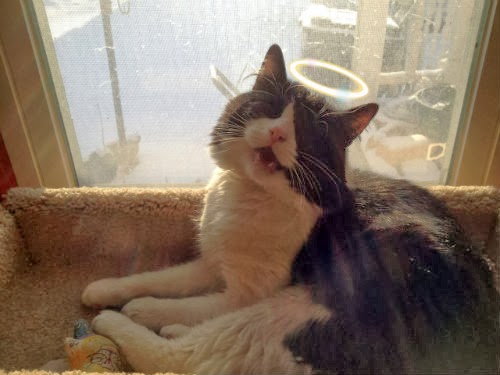 I'm sure we don't have a Goldilocks in the house so the question of the day becomes...was it Poppa Bear? 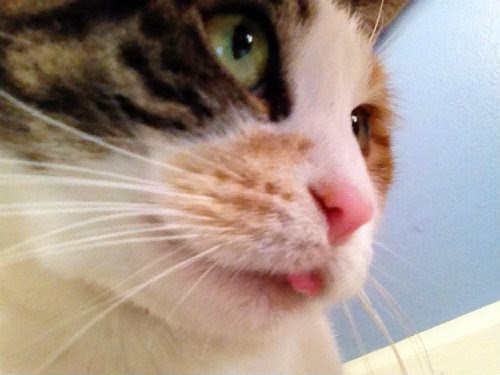 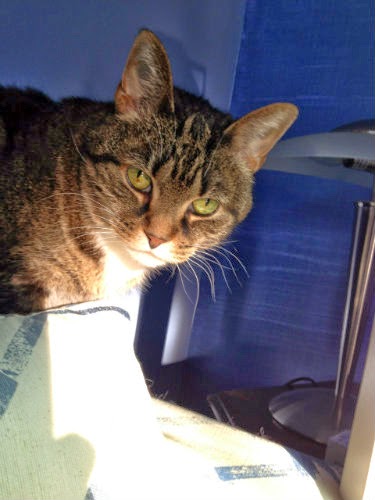 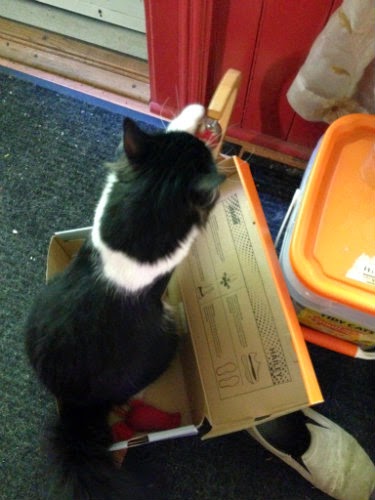 Happy Fourth of July to my American furrriends!!!!

Momma tried to post my video debut but instead it was a debacle. Any kittehs know how to upload videos from iPhones??

You'll just have to settle for this still shot of what I taught Momma. LOL!!

Months ago, Momma put this bell on a banana hook by the door. I ring the bell when ever I wanna go outside. If she doesn't jump fast enough I give the bell 2 paws. If she still isn't fast enough I wack it so hard it rolls across the laminate floor. Drives her C-R-A-Z-Y. Doesn't take much...

(Momma put that old shoe box by the door so it could go out with the recycling. Not gonna happen! Squeaky put Crusty the lobster in the box t and I like to sit on him.)

Hello and welcome to the latest edition of The Bibliophile Files!!!

For anyone new to TBF, in January I issued myself 2 reading challenges for the year and then invited everyone to follow along with me.

#1-To read books have that 9 different colors in the titles: blue, red, yellow, green, brown, black, white, other and implied. I've got three done and 3 more currently checked out of the library. Interestingly enough, I am finding this challenge harder than #2...

To read more about either challenge, click on The BF tab above.

Currently on my nightstand and stereo: Fat Tuesday, A Wilder Rose

I've finished 29 books or 39% of the challenge so far this year, which I don't think is so bad given that today is the halfway mark and I'll be able to read/listen to lots of books while I go camping. I had a photo of the pile of audiobooks that I'll be taking camping but the internet isn't playing nice so lets just say I currently have 16 audiobooks checked out of the library and one of them has 30 disks! I may have overdone it but last year I just about ran out and the local library wasn't very friendly to a girl who needed an audiobook fix!