It's been a fantastic week weather-wise. Just hot enough to not be called a lazy bum after lounging around the house and yard for days on end. Sometimes I come inside to cool off on the laminate floors or in the tub but I really prefer to be outside soaking up the heat with my black furs. This heat won't last forever... 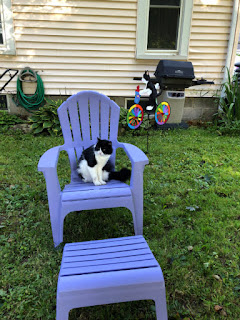 Momma's purple ADK chair is one of my favorite spots. The angle of the chair is quite comfortable and the human footrest is also nice for feline lounging. Don't worry, I let Momma sit in my her chair too. 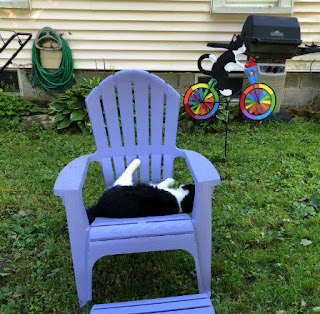 Sometimes I just prefer to lay here and look at the wind spinner that Momma bought cuz it looks so much like ME!!! Not every cat has a monument in their very own yard!

This is what we call the Paw of Approval.
It's also what we call keeping the krazy kitty focused on posing for the photo and not the shiny bulldog clips.


Z has been in his element this week. He's been outside in the heat day and night, not venturing far (as you'll see on Friday),  just soaking in all that late summer heat. He must have an inkling about summer fading into fall...

August was a fairly hot month, as most Augusts are. We are expecting another rainstorm tonight which will drop the temps tomorrow but we will be back to the 80s next week - just in time for all the kiddos to head back to school. Poor kiddos with no AC at school :(

Today's the day we announce the winner of our 6th anniversary of the HeLP for Hexie-aholics give away!!

Ok - so I'm not smart enough on this overly muggy Monday to figure out how to copy the random.com number generator to this post but I told random.com that I had 6 entries and it gave me #5 as the winner. That would be Paul Burega who blogs at A Dad who dyes fabric and quilts.

And what has Paul won the crowd eagerly asks??!! 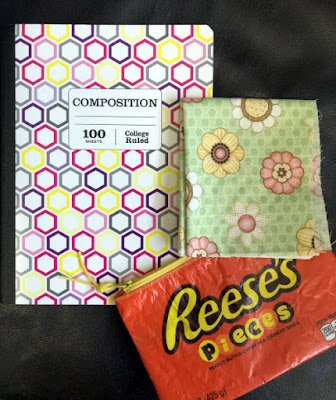 Paul has won a hexagon composition book (so affordable at Wally World that I bought all 8 of them), a hexie FQ (sadly one of only 2 hexie fabrics I saw at 3 different quilt stores on Friday) and a zipper candy bag made from his favorite candy.

Paul I sent you an email so if you'll respond with your address and your favorite candy I'll make the bag and get these goodies sent off to you.

Congrats to Paul and thanks to everyone who joined in the fun!! It's hard to believe I have been doing HeLP for 6 years, let alone stitching hexies for 7.5 years!

Is OK Momma ... I'll guard Cubby until you get him put together.

If it fits, I sits, right? And this one is party sized!!! I can invite Fluffy & Puddy from next door, Megatron from across the street, the cats from that red house down the street, the B&W cat that hasn't been to Frannies house lately....ooh there are so many...


======================================
PS -
Did you link up to the HeLP linky-versary giveaway last week? There are chances for both hexie and feline link ups. I extended the deadline until Sunday night and we'll draw a winner on Monday. No pictures of the prize yet but it involves choco and hexies. You knew that right?! I'll be picking up hexie fabric on my FART today, I'll make a zipper bag from the winners favorite candy and I already have another fun hexie item.

We're going to start today with a short and simple but important PSA:

Don't change out of your sneakers when you get home late without first turning on an "appropriate" number of lights... 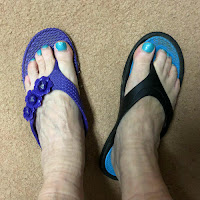 ...or you might not notice a problem until you see a mismatched pair of flipflops on the floor some time later.


Hmm...second yellow Tuesday in a row - Could Fall be knocking at our door? 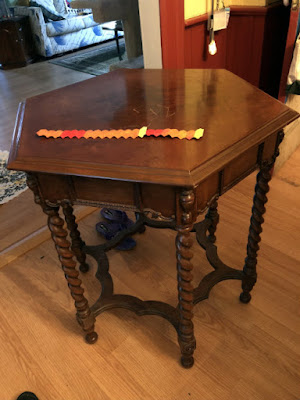 And here is the month of August so far...on my new hexagon table!! Now I just need to find it a permanent spot instead of the middle of the dining room. Z doesn't mind it here but I'm tired of walking around it.

Every year our county fair includes a silent auction by one of the local auction houses. This table was sold as an octagon gateleg table. It it neither an octagon nor a gateleg table. Kinda makes me wonder if I would have have them sell my items...


======================================
PS -
Did you link up to the HeLP linky-versary giveaway last week? I extended the deadline until Sunday night and we'll draw a winner on Monday. No pictures of the prize yet but it involves choco and hexies. You knew that right?! I'll be picking up hexie fabric on my FART Friday, I'll make a zipper bag from the winners favorite candy and I already have another fun hexie item.

It's two of my favorite days wrapped into one!! Hexie Linky Party and Feline Friday!!

Bonus - can you believe that HeLP is 6 years old today?? Yipp! It was started on 8/17/12!! In that vein I will send a little gift to a drawing winner. I just realized the linky-versary as I am typing this so I don't have the prize well thought out yet but I'll update the post with a picture next week.

RULES: Anyone that links is in the drawing. Since it's HeLP and Feline Friday, you can link once for hexies and again for felines, for 2 chances. Links must go to a specific post and not your blog in general. Posts must contain English Paper Piecing and or your cats. Links not following the rules will be removed from the linky party. Thanks for playing along!!!

Most of the previous week was spent finishing my Owls in the Mountains quilt:


I did receive some assistance. 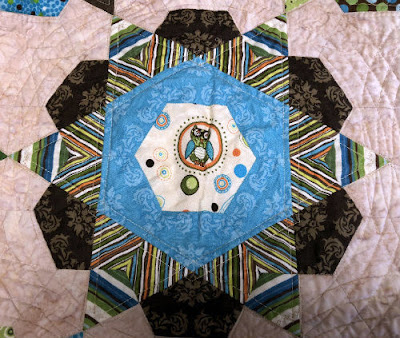 The quilt has been mostly quilted and bound for a year but the dense curves meant I needed to add more quilting to the rose stars. 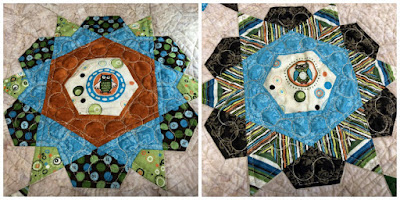 I used "rulers" to add circles. I didn't take a final closeup pic but I also did a couple circles around the owl in the centers. 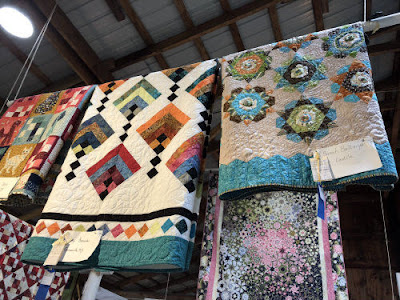 I have yet to figure out how they choose which quilts to hang open or folded at the fair. My owls must be napping as the quilt is hung sideways. It's hard to see in the picture but I did get a blue ribbon on this and my other 2 quilt entries. One of which is the red/white in the bottom left.

I'm practicing poses for my calendar. 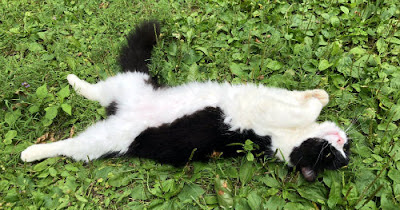 What do you think?

I was going to begin today's post with a ditty on how fickle Mother Nature is and the fact that the town I work in seems to be getting more rain than the town where I live. Example: it rained pretty good at work yesterday but when I got home and dragged the garbage can back from the curb it was nearly dry.


I was going to share this photo of one of the many cracks in my dried out lawn and then I was going to follow up by sticking something down in the crack to see how big it is after trying a large washer Sunday and not hitting bottom.

Except!! We got some lovely rain overnight (at home, not at work) and the crack wasn't so much a crack as a slight x in the clay dirt I call a lawn. I'm sure once we dry out again, the crack will fully reappear so the experiment will just be delayed. So - like I said - Mother Nature is fickle!


I'd say this was an average week for August. Next week is fair week which is typically unbearably hot and humid. There is no 'hot' scheduled in the forecast but they keep changing their mind on the rain. I'm guessing that means we need to prepare for humid. Me thinks I would prefer hot - if Mother Nature is listening...

Ha! I almost forgot to make this go live - and that was after thinking last week was the first Tuesday and trying to get it live then. Summer is just too crazy for thinking properly...

Hello and Welcome to my monthly book list. It's amazing how a little vacation time can mean lots of reading! That and lots of quilting time to finish fair entries. I've now finished 47 of 90 books for the year. School tax season is drawing near so that will help me up my numbers as well.

FINISHED
Skybreaker - #2 in a futuristic series where boats fly.
A Conspiracy of Faith
If I live
Baker's Magic - a fun little fantasy story
The Invisible Girls
Winter Study - I love reading a book from the Anna Pigeon series while camping - each book features a different National park.
Macbeth
The Curse of Crow Hollow - fantastic story and reader! Wish I could figure out who the reader is.
Girls Like Us
The Romanov Ransom
How to Hang a Witch - woohoo! I found out there is a squeal. Love the historical tidbits thrown in.
Her Last Breath
Dead Bolt
Down a Dark Road
Liar Temptress Soldier Spy - a bit long but an interesting historical novel about ladies in the Civil War
The Dead Will Tell

And now it's your turn - what books have you read recently? Anything counts - novel, magazine, quilt pattern and cereal box.

But then I found sissy's favorite blue fishy. I forgot just how much she loved that fish but it's a real good toy. I left it in the middle of the floor for you to enjoy too!

Dang! How did it get to be August already?! That means summer, and my Friday's off, is officially half over and I'm not happy about it. :(

I'm afraid I didn't pay enough attention to my elongated hexies this week.

The week could have gone this way:

On the other hand, maybe it was this way. I'm really not sure...


Either way - here is all of July! That wash outed hexie in the middle is a yellow - it never plays nice.

Last Friday I was at a sorta-LQS that had grunge fabrics so I decided to get some more, knowing that fall and winter were approaching sooner rather than later. I picked up 2 greens, blue and pink. I still need 2 purples to complete the rainbow since I already have white. 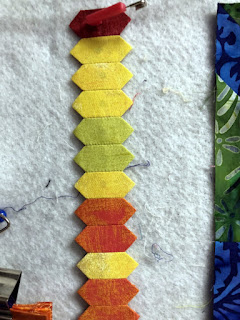 What I hadn't remembered is that I already had a bright green. It's barely discernible from my yellow in photos unless I play with the contrast. It's OK in person but it's not great. 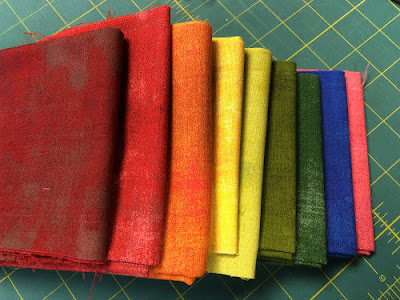 I didn't take pictures of the various green combinations. Some look great in person but I think it's probably better to cut into the new greens and see how they play in smaller pieces. If it's worth it, I'll trade out those 2 light greens from June.

How was your weather this week? I know a lot of places got drenched in rainstorms. Not so here...we are still considered "abnormally dry" according to the US Drought Monitor.