Remember my plan to keep adding finished hunter star blocks to the mothership every week? I'm already off the rails with that plan and I should have known better...

First thing I did Friday night was sew together the 14 finished blocks. I had originally planned to make a 10x12 block quilt so I'm planning to make the quilt in two columns and then sew the halves together. I've got 2 rows of 6 blocks sewn together and then the final two blocks are sewn into a pair.

Unfortunately for you guys, I forgot to take a picture of the mothership. You'll have to trust me that it looks good!

Last week I asked my Dad if he had any scraps of half round trim. He says it doesn't really exist but asked what I wanted it for. Have you seen those muslin covered pieces of half round for raising up one seam to make it easier for pressing without goofing up the other seams? I wanted one to make it easier to press open the center seam of these blocks. I was going to let it drop if he didn't have half round but he offered to make me something. Essentially I now have this pile of blocks ready to have the center seam pressed open but I'm waiting for my pressing "stick". Not sure how long they will sit as dad is in outside/garden mode at the moment... 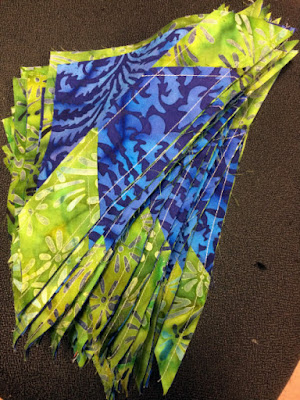 I've still got plenty more halves to sew together so that should keep me busy part of this week... 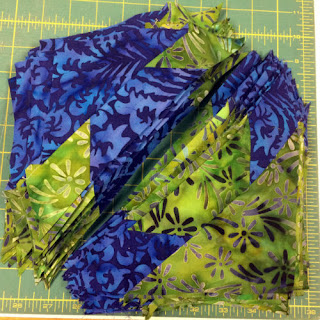 Other quilt lab projects from this weekend...

My guild hands out baggies to make blocks or strip sets at each meeting. We bring them back and then do something else with them at the next meeting. Eventually all the pieces are made into charity quilts. I had brought home 3 strip sets from our last meeting and used hunter star blocks as leader enders for putting these kits together. I'll stash them in my car so I don't forget to bring them to the next meeting. 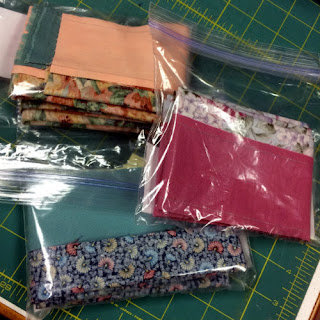 I also spent some time trimming scraps for my temperature hexie quilt. It's silly how this one project has grabbed me so much. I can't wait to check the temp every day at 1pm so I can add the next hexie for the week. I'm really stunned with the variety of temperatures/colors I've been able to use this week. I've seen other temperature projects that are gradual color changes but mine is jumping all over the place. Again, I should have known better cuz this is Western NY and if you don't like the weather just give it 5 minutes and she'll change... 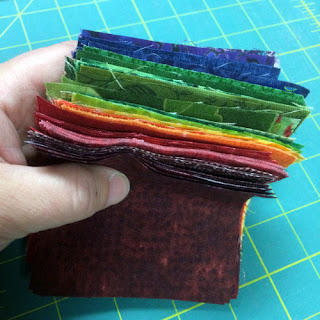 A lot of you will recall that Judy's Design Wall Monday was discontinued last week. I put out a call on my blog for new linky suggestions and received three, including a new DWM!! I'd still like to hear of more if you have a suggestion.

Hi Sara,
I'd like to see the pressy thingy when you get it from your Dad. It sounds interesting. Glad you are joining Design Wall Mondays at the new loction.

We have a weatherstation set up, and my partner is doing a query for me that will email me the recorded top each day in case I am not home to see it. I've drawn up my chart and got my hexies ready to go. I will be starting on Saturday, but I'm watching the forecasts and anticipating which colours I will need first.

You can buy half-round at the hardware store if your Dad is too busy with other stuff:
https://www.lowes.com/pd/EverTrue-1-x-1-2-x-8-Half-Round-Moulding/1085519

I'm going to wait on my temperature quilt start on Summer Solstice - a few more things might get pushed to finish with that outlook.

The temps in MO have been crazy too. Here is a linky party.
http://smallquiltsanddollquilts.blogspot.com/2017/05/design-wall-mondays-may-22-2017_22.html

you have been busy but struggling with half-round not come ccross that before, will do a search on google

Lots of sewing ahead! Thank you for sharing on Midweek Makers