I'm still working on making the blocks with 4 green squares but I had enough done to lay out half the quilt. This was the layout yesterday moning and I put Midgie in charge of protecting it while I went to work. She looks like she's serious about her duties. 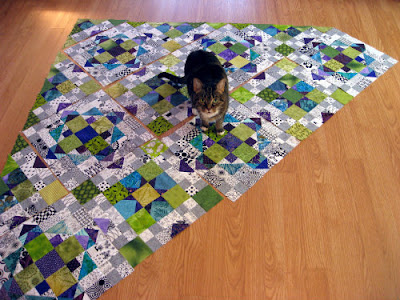 And as I'm sure you guessed, I came home to quilt blocks all over the floor. I had placed a box in the middle of the blocks for Midge to sit in (what can I say? the girl has a box fetish) and that was 1 of only 5 blocks that wasn't moved. I assumed it was Squeaky that had done the rearranging since they had her signature twist but this morning I caught this: 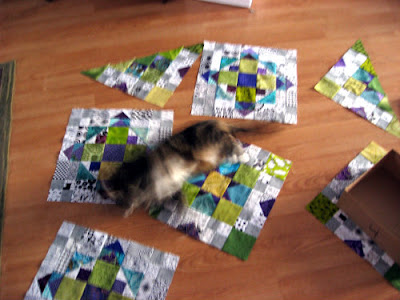 ﻿
Now I'm not sure who's to blame??!!
It doesn't matter as I have about half the layout in one piece - should have this half completed tonight! I don't think I have ever completed a mystery quilt this fast and it will be great to have a new quilt finished already in January. I didn't photograph them but I bought border fabrics over the weekend. I just hope they aren't too dark as this quilt reads very light to me.

PS - Don't forget the next hexie linky party is Thursday, 1/17/13! Get those projects ready and be ready for prizes!!! I was even able to secure an autographed book on my favorite topic!!!

PPS - this post was made after uploading pictures directly to my Picasa albums and then into the blog for anyone else who is having trouble with blogger this week...

WOW! This looks awesome!! What a fun finish this will be!! :)

Glad to see you have Blogger under your control. Looking forward to seeing the border fabric, and those missing felines on Friday.

Love your Easy Street, and of course, your helpers made me laugh!

Your Easy Street is gorgeous! Good for you to be so on top of things... and I love seeing the cat tricks too.

Just lovely! Your colorway sings to me.

Looks really good, Sarah. Maybe you should hire Midgie to design your next quilt. She has a knack!

Love your quilt! Your colors are spectacular! I always lay out quilt pieces on my king-size bed as I am putting them together. Every time I leave them for a couple of minutes I find them all over the place. I have five cats but only one does this. I always know who to yell at! Debbie in WV

Your Easy Street looks great. The pics of the cats messing up the blocks was very funny.