It was a lazy weekend which lead to a little progress on a lot of projects.

I'm just going to bore you with two...

You will recall that I finished stitching my hexie tree skirt last week. The next step was to buy backing and binding fabric. I found this lovely poinsettia for the backing but I haven't settled on binding fabric just yet. As they say, there is plenty of time. 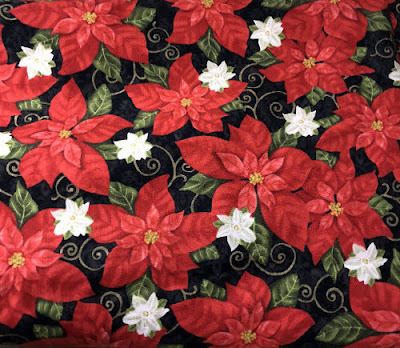 I bought the end of the bolt, just an inch shy of 2 yards since I wasn't sure how much I was going to need. The pattern called for 49" square backing and at the end of a Friday I wasn't in the mood for math. My original plan had been to quilt this baby with the diamond points on but when it became apparent that the backing was almost close to the size of the tree skirt I decided to cut them off first and baste the top to the batting. When I get home I need to remember to stay stitch the edge so none of the hand stitching comes undone. 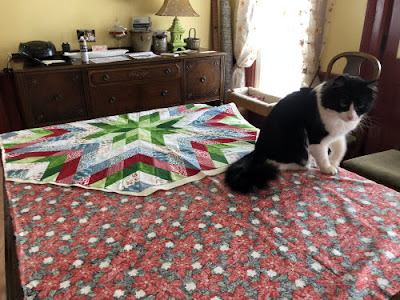 With the help of my Quality Control Officer, I then basted the top/batting to the backing, not basting near the edge that was short. 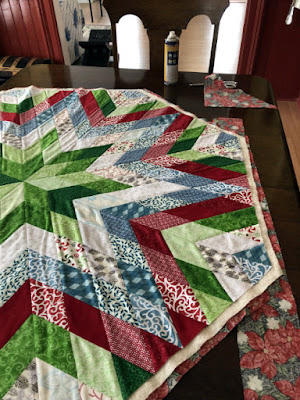 Not spray basting near the short edge allowed me to use my machine to add on a 4" strip and get it finished up right quick. It still doesn't lay 100% flat but I know that quilting will work out part of it and cutting this to become a tree skirt will work out the rest. It's been suggested that I don't cut this for a tree skirt, leaving it as a table topper, but with it not lying flat I'll be happier if it becomes the tree skirt. 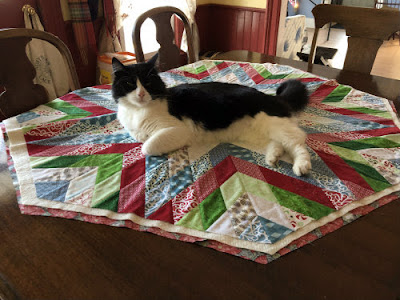 Zorro then decided to try out the skirt in preparation for it's first use in December. Just 259 days till Christmas but only 235 days till the tree goes up! Can you tell how excited he is?

This has now been set aside until after I finish some end-of-April deadlines. When I do get back to it, I'll be doing some simple straight line stitching that follows the "starburst" or "fireworks" outlines of the various colors.

Oops - Changed my mind - there are so many pictures for the other project that I'm saving it for tomorrow. Something to look forward to, eh?

Beautiful, beautiful! Each year you will look forward to seeing and using your tree skirt. That Z man--he is quiet the QC Director--looks like he has claimed the project for himself.

Lovely fabric. Thanks to your Quality Control Officer, your tree skirt is going to look fantastic!

That tree skirt is gorgeous! The quality control officers seems to things so too.

I see Zorro is making sure it lays flat for you..;))) hugs, Julierose

What a beautiful fabric!