Have you ever made a weekend to do list and resolved to get as much as possible done without straying from the list? Yeh, that was my goal for the weekend and this was my list:
Except, I never got past #2.

I cut the green sashing Friday evening. I was still a little skeptical about cutting into the koi fabric so I saved it for later in the weekend.

When I bought the kangaroo fabric I was still in my wash everything mode. I washed it and then of course it needed ironing but since I had bought the end of the bolt (at least 5 or 6 yards) it was just such an overwhelming task that it never got ironed. I sorta folded the fabric in half and wound the wrinkled mess back on the cardboard bolt. Now I have to iron a portion at a time without dragging the whole thing on the floor and then cut what I need. I am *very* tempted to wash the whole thing again and take it out of the dryer before the wrinkles are set. 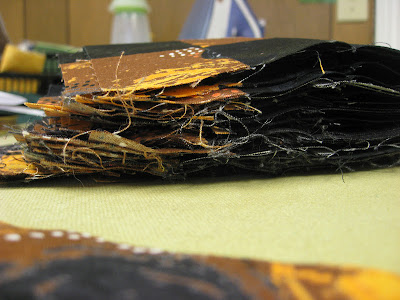 Sew...I cut some strips Saturday and thought oh, I would just use up the blacks that were already cut and waiting to be used. I sewed and sewed. I was having a great time churning out more blocks. When I used up the kangaroo strips I had cut before the black was used up I decided to iron a bigger chunk and cut more strips while also pulling out more blacks.
Sunday began early with an MVA (we finally have snow!!!!) so I worked hard during the morning but began fading in the early afternoon. I did finish one audiobook and have nearly finished a second - I so love sewing along to a good book! 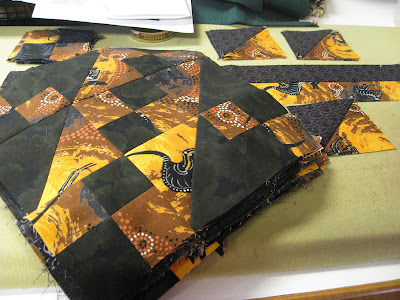 When the weekend was over I had 39 out of 48 blocks done with 3 more partially done. Don't forget last Monday I only had 18 blocks done. I probably could have gotten at least 4 more blocks done last night if I hadn't fallen asleep watching America's Test Kitchen on DVD.

My *only* goal for the next week is to finish the blocks and get the top together. I am sew close there is no use relegating it to the corner when I can just gitterdone  :) and I can't wait to see what it looks like!!! 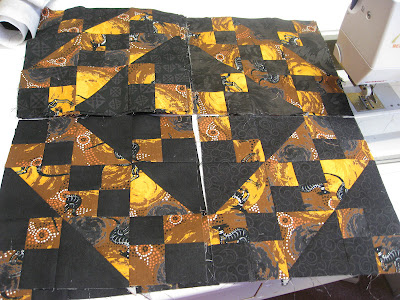 You can DO it!!! It's okay if you didn't finish your list. Weekend lists don't necessarily *have* to be finished. Just good attempts made. America's Test Kitchen, huh?! :)

Love the colors of your quilt. Nice job.

Sometimes you gotta just toss that list out the window and go with the flow!

All I did was be a slug and watch season 7 of the Xfiles.
Season 8 coming up-

Take comfort in the fact that you are not alone.....

Oh, I think this quilt is a beauty! Go for it!
BTW, I love America's Test Kitchen. I catch it on Saturday while folding laundry, if I can! : )