Somehow I never started the NewFO I thought I would in January...not to worry tho as I did start 5 other projects! One is done, I hope another is done this weekend and one is probably long term altho a little addictive. 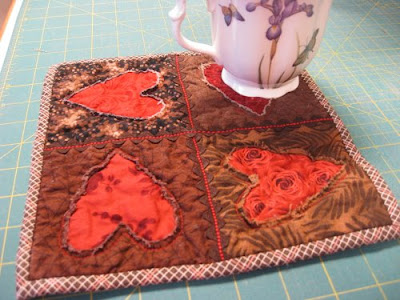 This is the NewFO I finished already. A mug rug that was donated to my local library for their V-Day fundraiser. I had planned to also make one with hexies instead of the hearts but forgot until I was typing this post. I haven't picked colors for the hexie version yet. 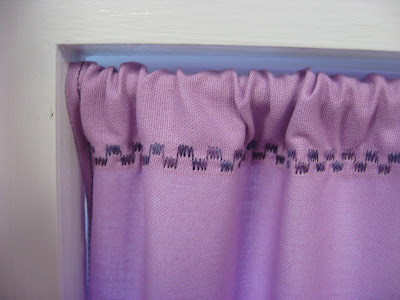 This is the NewFO that I hope is finished this weekend. I haven't specified what it is but several people have made some very close guesses. 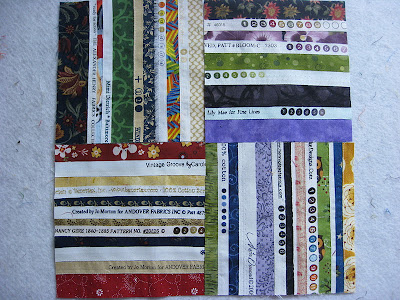 This is my addictive NewFO. I had thought it would be long term but it's too easy to grab for a few minutes here and there. This could be a good thing so that I don't have parts sitting around forever. Maybe I should aim for the end of the year? I'll still collect selvages but I'm not sure what the next project will be and I need to see how many I have left when this quilt is done anyway. 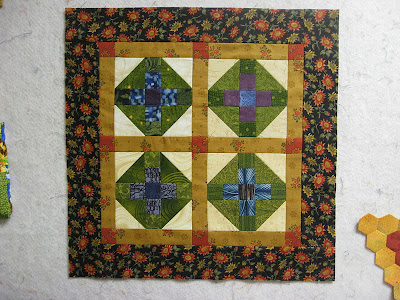 This NewFO would probably be pretty easy to get finished and since I hope to keep up with the doll-quilt-a-month-a-long at http://sentimentalquilter.blogspot.com/2012/02/february-small-quilt-challenge.html (this is the link for the next doll quilt) I better get caught up and keep the quilting simple. I had thought about fans but we shall see when I get the red backing on what strikes me. 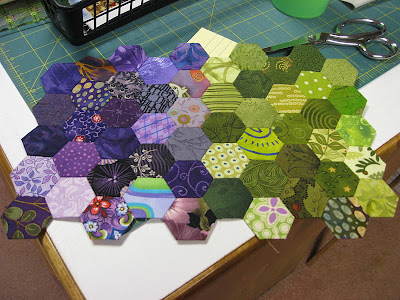 The last NewFO isn't done yet because I wasn't sure how I wanted to proceed. This is a cover for my Kindle and my original idea was to make the hexies go all the way around without any seams but I wasn't sure how to make that work along with the tutorial that I working from. I've now decided that the best way to proceed will be to make the hexies a little bit bigger, quilt this to the batting and then do the seams as on the tutorial. I think it will be safer for the Kindle. Now if I could just figure out what's wrong with my wifi connection all will be honky dorey. 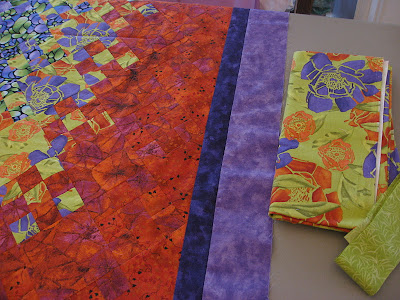 My January UFO was my Blooming 9-Patch, probably started 4 or 5 years ago. I had hoped to finish the top (which turned out I just needed borders) and get her quilted this month. I purchased the border fabrics and got part of it on but had to stop when I was just a little short on the light purple fabric. I did buy another quarter yard but I still need to finish the borders. I bought batting (on sale!) and I should have enough scraps to piece the back. I would like to think this doesn't now go to the bottom of the UFO pile but who knows. 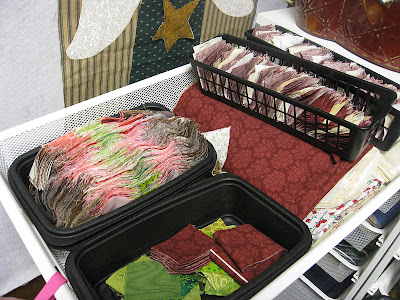 My February UFO is RollRollCottonBoll which was Bonnie's 2010 mystery project. I've actually listed RRCB for 2 months in this year's UFO Challenge so I don't have specific goals this month other than to make progress. I have 4 steps left: neutral string blocks (and y'all know how much I love them!), assembling the 600 HSTs from those 2 skinny bins into sashing and attaching them to the blocks which are under the red and neutral fabrics, assembling the center of the top and then the borders (parts are in that black dish to the left). OK - no real pressure this month and I like that!
Blogged by Sarah at 1:13 PM

Holy cow...you make me tired. That's a lot of projects!

looking good- you're off to a great start! i'd love to hear more about hte blooming 9 patch...

Your heart mug rug is just the most darling thing!! I really like the look of it. I've seen a couple others that are doing the doll quilts through the sentimental quilter blog. Do you have her books?? You've always got such fun things going on!! :)

How do you sew the selvedges together? Do you use a paper foundation?

I need to hurry and send my selvages before you are finished!
So many good things going on here, Sarah!
Still have no clue on your mystery, since it wasn't curtains.

Those are great projects. I love the hearts.

Your Kindle cover is going to look great!
I hope you find time to finish off some things on your list.....

Some wonderful projects - the mug rug is so cute.
Lillian @ lillianscupboard.wordpress.com

We thinks maybe you are the over achiever of this bunch - wonderful new FO's and a spectacular finish of your UFO. Thank you for sharing this with us. Judy C

Really? So many projects! I love your purple, green, and red UFO - hope you get it finished and show it off! Have fun with all the sewing!